Barbara Kimbugwe, the former Miss Uganda for 2004-2005 has been hospitalised after she suffered what reports claim was a serious heart attack.

According to reports, she was rushed to a Los Angeles hospital after she suffered an heart attack that left her entire body totally motionless.

Barbara is the current president of Kimbra Foundation, a charity organisation, and chief executive officer (CEO) of Diva Fashions Boutique in Kabalagala, off Ggaba Road. She lives in Florida, USA, with her husband Al Sears.

Barbara Kimbugwe is known for her strong character and belief in hard work. She left for United States to further her education after her contract as Miss Uganda ended.

At one time this seemed impossible but now this fight looks like it’s really going to happen. The fight was fueled as UFC (Ultimate Fighteing Championship) President Dana White came out with an offer that will be hard to turn down as he offered both McGregor and Floyd $25 million (90,163,750,000 Uganda shillings) each and Pay […] 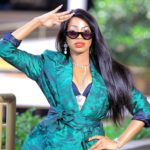 Rude Boy and Weasel to Record Song Together11 love this

Rude Boy and Weasel to Record Song Together11 love this
error: Content is protected !!